Processed or Due Process? Make It Make Sense

I’d been charged with felony theft, which I didn’t understand whatsoever at the time. But these hard faces full of hatred inside of the police department, informed me of a more conflicted time ahead of me. I was struggling to remember any working numbers, having now been so dependent upon a cell phone at 19 years old. I was immensely disappointed with myself and before my tears broke through, I realized the truth at hand: I didn’t have any money on me. Truth be told, I didn’t have any money in my checking account.

What chance did I have of getting bailed out this time, and what lawyer would possibly take my case? I asked myself this as I overheard a dozen others awaiting their turns on the phone for an outbound call. I was guilty of stealing what, a $50 polo shirt? Felony theft sounded serious. My bail amount seemed low compared to others, set at $8,000, but what did this mean? An older guy scribbled two similar numbers down and told me to practice my best sales pitch before calling these lawyers, because they MIGHT answer. I felt myself getting desperate.

A bewildering month later, I was called for an “attorney visit”. Another 75 excruciating minutes later, this man who couldn’t have looked more of an opposite of me — waddled through the door. He was obese to a disadvantage, sweating from the walk inside the jail facility, and reaking of a thousand cigarettes. He quickly introduced himself, mispronounced my first name, then asked me if I would accept a deal for 10 years in the penitentiary. I could not believe it. My mental health shot, I walked out of the meeting and back to where I’d be transported to the cell I was in. I tossed and turned for the next thirty days, until I was abruptly woken up for what would be my first & only court appearance. Realizing I had pockets, I reached for a business card. Shaking myself awake, I remembered that he had not given me one — so where’d the prison deal come from?

I never saw the guy from before, so I was confused after I’d been brought into court and informed of a probation deal that I’d agreed to — yet, had never been told of or explained about beforehand. After 60+ days, the idea of freedom sounded better than Justice. I signed my name to some sheet and was whisked away. It took another three weeks for me to be released. The “attorney” never reached out to me nor visited to follow up. I wondered if he’d even been paid for my case — couldn’t have been, I assured myself.

Once released, I found the probation office to be a labyrinth of bad information and disingenuous practice. I asked if my attorney could be reached and the clerk said I didn’t have an attorney assigned to my case anymore; that I’d have to find him independently. After three months of paying a catalog of fees and waiting hours to visit an officer named Hankhouse for ten minutes, I arrived for my fourth visit only to be told that I was not in the system and needed to visit the courts for any more information regarding a probationary status. I visited the attorney’s office and was told there was no record of my name in their files. I’d been used, abused, and reused by the criminal justice system and there was nobody to report an injustice to or scream my lungs out. I could not believe what had occurred to me.

Years later, I sat in a panel discussion focusing on the Sixth Amendment of the US Constitution. I learned of the landmark 1963 Supreme Court case, Gideon v. Wainwright, and that this case ensured that even a poor or indigent defendant was entitled to effective assistance of legal counsel, on the grounds of both the Sixth and Fourteenth Amendments.¹ I witnessed all these speakers provide ideas on how to further the cause for funding indigent defense efforts, smiling and thinking as far and wide as they could imagine. I wondered where that cherubic, smelly attorney I once believed to be my lawyer, was among all these faces in the crowd. He was never found — much like the Sixth Amendment’s guarantee of procedural rights, such as the right to counsel, for many defendants in the American criminal justice system. 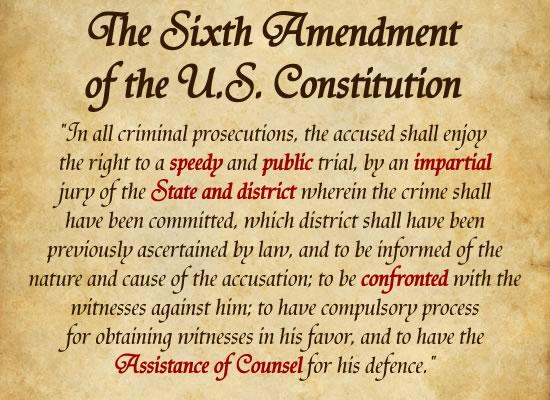 *Over 80% of felony defendants with State or federal charges, have public defenders or court-appointed attorneys.² Men and women everyday lose their liberties and livelihoods due to an oppressive pre-trial process where bail is excessive, counsel is insufficient, and incarceration is adhesive. *Caseload maximums for public defenders nationwide can range between several hundred cases at any time, establishing a disconnection between themselves and any indigent defendants.³ Tenets of the United States Constitution seem to apply only to rich & famous people. The right to counsel may be extended, but there’s absolutely no way to get the effective counsel needed for a legal defense you’re entitled to, unless you pay tens of thousands of dollars. I tried getting it expunged years ago, but I couldn’t afford a lawyer and wished the process was automated. The stain from the experience remains forever present.